A Little Bit About Our Library

The Dyckman Free Library was the gift of the late Francis H. Dyckman. Francis H. Dyckman came to Sleepy Eye from New York City and established the first bank. He married his wife Louise Chance (Heroy) Dyckman in New York City in April of 1885. In August of 1886 their daughter Mary Lang Dyckman was born in Sleepy Eye. By the 1900 census the family was living in Essex New Jersey. Mr. Dyckman died May 9, 1904 in Orange New Jersey.
The Library was founded on the same plan as the Andrew Carnegie libraries – the donor gave the building, provided the people who annually tax themselves for the books and maintenance of the property. The building was built in 1900, and was then dedicated in May of 1901. 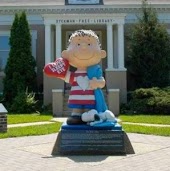 Who is Linus van Pelt?
Linus Van Pelt, calm philosopher, brother of high-strung Lucy, friend of Charlie Brown, was a character in the comic strip and animated TV franchise known as Peanuts, created by Charles M. Schulz. Linus took his blanket everywhere, applied zen to everyday drama, and had an uncanny grasp of the human condition.
From https://www.waymarking.com/waymarks/WMT1Q8_Linus_Van_Pelt_Sleepy_Eye_MN 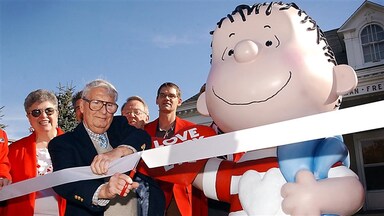 Who is Linus Maurer?
Linus Maurer (son of Nick & Ella) was born and raised in Sleepy Eye, Minnesota.  He spent four years in the Navy during World War II and then went on to study art at the Minneapolis school of art.  Following graduation, he became a cartoon instructor at the art instruction school in Minneapolis, where Charles Schulz was teaching cartooning.  Schulz and Maurer became good friends and Schulz added the character “Linus” (named after his friend) into his newly developed comic strip “Peanuts”.
Maurer moved to California and went from teaching cartooning to creating cartoons for newspaper syndication, television, and publishing.  In addition, he also created the internationally syndicated daily newspaper puzzle “Challenger”. Linus Maurer became a professional syndicated, award-winning cartoonist, magazine illustrator, and whimsical painter.

Ishtakhaba (Dakota: Ištáȟba), also known as Chief Sleepy Eyes
This life size carving of Chief Sleepy Eye was carved by artist James Cushing out of cherry wood. The artist was commissioned by Mr. C.F. Flood, of Mankato MN, President of Advertising Unlimited, Inc. in Sleepy Eye. Mr. Flood had been at Stuttgart AR for a national waterfowl event when he came across Mr. and Mrs. Cushing displaying their art; and being impressed with Mr. Cushing's talent Mr. Flood commissioned him.
Mr. Cushing carved the statue near Mountain View, Arkansas. The carving was donated to the City of Sleepy Eye on January 5, 1978; and is now on display at the Dyckman Library.
Chief Sleepy Eyes, Ish-Tak-Ha-Ba, was born around 1780 at Swan Lake in Nicollet County and was given the name “Sleepy Eye” because of his drooping eyelid(s). Ish-Tak-Ha-Ba was known to be a compassionate person and was of great importance to the area.
The Chief was one of four Sioux Native Americans (four Ojibwe also attended) chosen to meet President James Monroe in 1824 in the nation’s capital. He signed the treaties of Prairie du Chien (1825 and 1830),  Mendota (1836), and Traverse des Sioux (1851).
He moved his village to a lake nearby the town now known as Sleepy Eye in 1857, and both are named for him.  His recommendations to traders led to the successful settlement of Mankato, away from flood areas.
Chief Sleepy Eye died in Roberts County, South Dakota in 1860.  In 1902 his remains were moved from South Dakota, and buried with appropriate ceremonies at the monument now dedicated to him, not far from the Library.  There is also a bronze statue of the Chief near the Post Office.
UA-135577565-1